Think Engineer entered a team in HackIoT - Reading Smart City 2018. A great opportunity to mix with the IoT community, play with some hardware and be challenged. Three of us, Charlie - Business Development Manager; Steve - Director/Cofounder and Prototype Engineer; and Andreus, Prototype Engineer, met up at the office late on Friday afternoon and headed off to the Thames Valley Science Park. I'd never been to the place before so first off, that's a pretty impressive facility!

Having found where we needed to be we grabbed a table in a spot we all liked and relieved ourselves of all the kit we'd brought with us. A loud but friendly American voice broke through the background noise and we found ourselves being warmly welcomed by Angel Rivera. It would later turn out that he was to compare the event and was with Microshare.IO and a fantastic Developer Advocate, but for now he wanted to rib us a little for turning up with crates of hardware and a fleet of laptops looking conspicuously like we might be a professional IoT prototyping outfit or something. Having done the introductions and had an in depth conversation about the delight that is my laptop bag we were relieved to learn we weren't the only team with professional credentials. Another team of two we're present.

We grabbed a coffee and filed down one floor with everyone else to the introduction and opening of the hackathon. The point was that the science park had had a LoRaWAN gateway installed. That's pretty cool, we all thought, it's probably in range of our offices! Hardware was handed out, a LoRaWAN equipped platform called the ExpPloRer LoRa Board.

As we sat down to discuss what we might do to meet the criteria... Health and Wellbeing, Transport and logistics, Environment and Data Applications. We wanted to come up with something which would have all element of all of this. After a mass brain dump we settled on a device for detecting the ongoing build-up of debris in street drains, taking the view that the enormous puddles we all deal with regularly as a result of blocked street drains have an impact across Health and Wellbeing, Transport and logistics and the Environment. We'd build a Data Application so that was the full set.

First, we put the hardware together and wrote some simple code and started getting used to the behaviour of our ultrasound sensor. All seemed good so Steve and Andreus set about refining code, creating a real time database on Firebase and writing a web app. The theory was this...

An ultrasound depth/proximity sensor would be mounted beneath the drain grill, facing downwards, allowing it to monitor the distance from the grate to the top of any debris building up and monitor it. If the level rises continuously the system watches for rain. If significant rain fall doesn't clear, or reduce the level of debris a flag appears on the operators map. The higher the level and the more evidence that rain is not washing the debris away the more severe the alert. We came up with a name for the product, BrainDrain and started work on branding. Now this was never going to be refined, we had about 24 hours in total but we did manage to design a logo and put together a 1 page website for the product and a Power Point for the presentation to judges alongside the branded web app and working prototype and designed a casing in 3d which we rendered but couldn't print. Let's be honest here, the tube which represented the drain was actually a rolled up pizza box, we hadn't had the time to refine what had been a temporary thought at 4am. 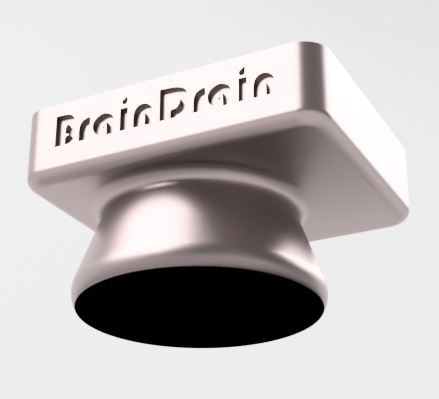 We had a fantastic time, met some great people and made some good contacts. The most notable thing was the amount of young talent present and the quality of the work they did. There was a period of time in that place when people were monitoring everything from the location and health of cows to the temperature of insulin.