The Festival of Digital Disruption, put on annually by Louize Clark and ConnectTVT, celebrates the tech industry in the Thames Valley. FoDD is an amazing event every year and this year was no exception. FoDD is really a collection of individual sub-events and as a company we attended most of it. Each of us have written about our experiences.

This year, Louise Clarke and ConnectTVT decided on a conference to highlight the good that the tech industry is, has and will contribute to society. Against a backdrop of negative headlines in recent times this seemed like a great idea, and it was as it turned out.

On arrival at the conference I was delighted to see not only a full auditorium but also a huge contingent of young students. ConnectTVT had encouraged local businesses to purchase "Next Gen" tickets for students in support of the event. Think Engineer contributed to this along with many others.

For me the highlight was Hadeel Ayoub from BrightSign. Hadeel walked on stage in front of an audience who had no idea what we were about to see. She started signing silently and I wondered if there was going to be an interpreter. There was, it was the glove Hadeel was wearing on one hand. She held the glove up to her lapel mic and the room erupted into applause as a voice was heard to say, "I'm Hadeel Ayoub and this is BrightSign, a glove which can translate sign language". Hadeel spoke about the challenges she had faced, learning all the skills needed to create the device for herself. She had designed and built the original prototype entirely herself, learning to code in several disciplines, electronics and many other skills as she worked. BrightSign learns it's sign language from it's wearer so when asked what version of sign language it could translate the answer was any and all, even personal signs and gestures could be learned. The potential to improve lives was immediately apparent and the approach taken made the product absolutely inclusive.

Seeing the company logo and the message we'd provided on the slides before the conference started was also nice. Thanks Louize.

As part of the Festival of Digital Disruption (FoDD), Think Engineer were asked to help out with the Fashtech School Challenge. The event involved many schools in the local Reading area, each of which sent along a team (or two) of their brightest fashion and tech savvy students to come up with ideas for the next generation of wearable technology. Before the day itself, the teams were given a list of characters that represent different stakeholders in the tech industry, such as the Developer, the Startup founder, and the Next Generation. The teams were tasked with coming up with a new killer idea for a wearable tech product that would appeal to one or more of these characters. On the day, the kids had the opportunity to refine their ideas with the help of a team of industry mentors, followed by pitching their ideas to the room.

Throughout the day we also heard some great talks from company founders in the tech and wearables industry, including topics such as history of wearable firsts, sustainability in engineering, mobile app development, and more. The teams were also led through various design thinking exercises to help firm up their product ideas further. I was asked to come along to support the teams as a ‘roaming mentor’, offering insights into what kind of technologies could be used to bring the ideas to life, and helping to focus and guide the students during discussions. I was pleasantly surprised at some of the very creative ideas being devised by these young and free-thinking minds. Many of the product ideas were highly ambitious and perhaps sometimes outside the realm of technologically achievable – but each idea focused on solving real problems faced by different potential customers in the tech industry. I astonished to find that some teams had come up with products that were worryingly close to real wearable tech products that we are currently developing here at Think Engineer – I managed to not violate any NDA's luckily.

I was especially impressed with one team in particular who were addressing a problem that I hadn’t even considered: the damage done to professional ladies’ feet when wearing high-heels for too long. Their solution? Retractable-heeled smart shoes. Their idea was not only technologically achievable, but it was a unique product that solved a real problem – they even had statistics to back up their excellent product pitch!

Fighting through the presentation jitters that can affect anybody when speaking publicly, every team managed to communicate their ideas effectively having taken on board the advice of the various speakers and mentors. Some teams even had working prototypes or mock-ups!

Though our contribution was small, Think Engineer was delighted to be able to help out during this challenge. We truly believe that the future of the tech industry rests squarely on the shoulders of the next generation; those brilliant young minds who have the smarts, motivation, and talent to change this world for the better. We in the tech industry have a shared responsibility to foster creativity and practical skills development in the young engineers, technologists, and industry leaders of the future.

There was a great mix of events making up FODD 2018. I kicked off my participation by attending F*#k Up Nights, an evening of people sharing stories of there failures. It was great to hear a little about how tech entrepreneurs had failed in the past, and what they’d taken away from their F*#k Ups.

Yannick Kwick, CEO of F*#kup Inc, dialled in (from Spain I believe) and shared his experience in setting up F*#kup Nights as a global event. As you can imagine building a global community of people running similar events and sharing experiences isn’t without it’s challenges, and Yannick told us that initially it was free for people to start-up their own faction for their city. After growing to dozens of cities around the world they realised they were doing a lot of work to keep on top of coordinating and managing everything with no money coming in to cover the overheads, and when they decided to start charging a small monthly fee to get over this, they lost more than half of their cities which they have had to slowly build up again. Suffice to say, his still growing strong, building his team and making new mistakes to learn from.

There were five other speakers sharing their digital failures on the night, of particular interest to me were Matt Webb, Global CTO of Mirrum Agency and Nick Holland, founder of Limbick Labs. The takeaway lesson from Matt’s talk was that when building a shared tech team for a large multinational company, DON’T assume common sense will prevail. Nick spoke about a company he built which was basically an IMDb for world cinema, called SubReview. A great idea coming from his own interests and identified gap, but one that just got parked due to a lack of self-belief and long-term thinking. It was a great opportunity to hear their stories, and more details about their experiences over a few drinks after the talks.

Speaking of drinks, it wouldn’t be right not to mention the great beer and cheese selection laid on for the event by Reading’s own Grumpy Goat. Very nice touch!

As a small business owner, and supporting a client base of new and growing businesses, the Creative Ways to Fund event was a great afternoon hearing from speakers about their funding stories. It was a rare opportunity to talk openly with founders who have bootstrapped businesses, raised venture capital and angel investment. Alongside the company owners who were sharing their success stories, it was really good to hear from some venture capitalists and angle investors.

One story that stood out to me was from Darron Anley, founder of Siren Craft Brew, an excellent local brewery that had successful raised a significant amount from Crowdfunding in exchange for equity. If you get the chance to sample some Siren Craft beers, I’d recommend it!

FODD wrapped up with an amazing VIP Party, 50 Game Changers! An event bringing together the inspiring start-ups and scale-ups hidden around the Thames Valley! Overall, FODD was an incredible few days and I’d really like to say a massive thanks to Louize Clarke and the team for the monumental effort of organising it.

We all enjoyed the VIP party, it was purely networking, no talks/other activities to distract away from it. There was an awesome snack/drink service which made every game changer feel special. I met some game changers who were also specialised in specific applications of IoT (City Farm Systems - specialising in IoT urban farming). We even debugged some of our own Android code with Steve from Airbyte - I ended up stumping him

Of the many FoDD events I only made it to the 50 Game Changers party. The opportunity to discuss the current state-of-the-art in IoT and technology with some of the brightest bleeding-edge innovators in the Thames Valley is a truly valuable commodity and just one of the amazing benefits of FoDD. It's great to be able to relax with like-minded people and appreciate all of the amazing things that are happening locally. 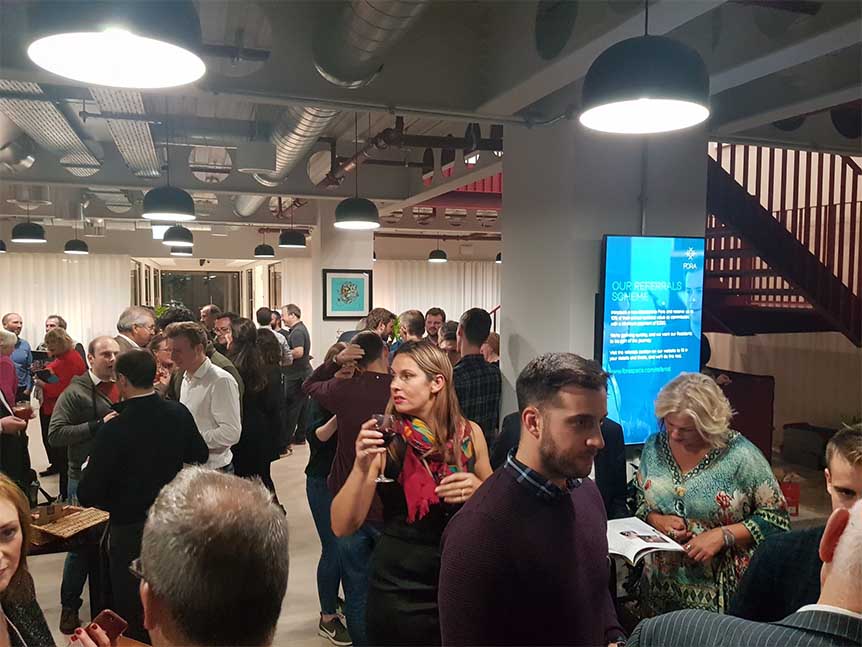